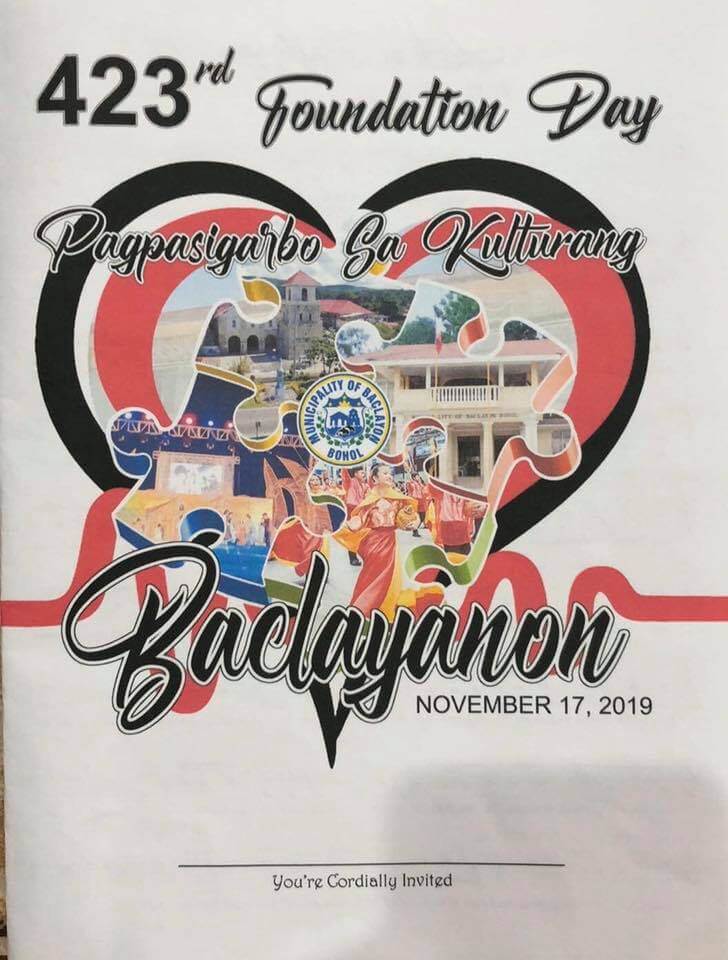 Baclayon has played a prominent and proud role in the history of Bohol as it was the first municipality to be established in the island by the Spaniards.

Around the 12th Century A.D. a group from Northern Mindinao, the Dapitanes, established themselves in the strait between the islands of Bohol and Panglao.

In 1563, the Dapitan kingdom was attacked by the Ternateans of the Mollucas. Not long afterwards, with the departure of the Dapitanes from the island, another settlement was formed six kilometers along from the old Dapitan kingdom. Since this new settlement was a good walking distance from the old kingdom, it became known as “Baklayon” or place which is a good walking distance from another place.

Baklayon was ruled by Datu Sikatuna, the chieftain of Bohol and in 1565, Spanish explorer Capitan Miguel Lopez de Legaspi reached the shores of the island in search of trade routes. Although he and his fleet were originally met with hostility, Legaspi explained he was on a mission of peace, not to destroy, kill or plunder. Legaspi subsequently became friends with Sikatuna, performing a blood compact, or Sandugo (meaning “one blood”), on March 25, 1565, the initiation of which is considered the first treaty of friendship between the Spaniards and Filipinos.

The blood compact as described by Legaspi;

A few years after the blood compact, the Philippines was divided into “Encomienderos” as an effect of a Royal Decree passed by the King of Spain, and Bohol was granted to Diego de Frias in 1571. An “Encomienda”, referring to a piece of land granted to the Spanish soldiers in which they would be able to own and farm but the role of Ecomienderos, also included the responsibilities of Christianizing the natives and extracting tribute from them.

Knowing the responsibilities of Encomienderos, missionaries were requested to be sent to Bohol. On November 17, 1596, two Jesuit priests, Fr. Juan de Torres and Fr. Gabriel Sanchez, left Cebu for Bohol, and on the same day set foot in Baclayon to start the religious conversion of the villagers. Through hard work, patience and perseverance, the duo succeeded in winning the native’s confidence and the formal and systematic evangelization and Christainization of the Boholanos was begun.

It was not until the growth in the number of Baclayon catechumens was ascertained that the decision to construct a visita (or chapel) and residencia for the Jesuit doctrineros was agreed upon. The chapel resembled more like a hut, made from light, native materials such as wood and nipa. Baclayon, then being the residence of the Jesuit Superior General, was the center of the Bohol missions and the visita became the hub of Christian civilization in Bohol. Many people from neighboring districts and islands travelled to Baclayon to seek instruction and incorporation into the Roman Catholic faith.

However, on October 26, 1600, Baclayon was raided by around 300 Maguindanao Moros in 50 war boats led by Datu Sali and Datu Sirongan. Fortunately, their coming was forewarned, and when the raiders arrived 3 to 4 hours later, the people were nowhere to be found. Only four elderly people who resisted against fleeing were killed before the raiders sailed away. In fear of more raids against the “Residencia” it was transferred to Loboc.

Life in Baclayon went on as usual and the population grew. In 1717, the settlement was raised to the status of a parish and construction of a new and sturdier church began. Through forced labor, 200 natives worked on the church until its completion in 1727. The design of the completed church was akin to a fortress to protect the Jesuits and the community from persistent Moro raids. With a belfry which served  as a watchtower, a rampart around the exterior and tunnels underneath the church the Spanish missionaries earned the affectionate title of El Padre (The Father).

Baclayon then became a thriving settlement with 1,600 taxpayers. Due to the very large area covered by Baclayon, which then inlcuded Tagbilaran, Alburquerque, Balilihan, Corella and Sikatuna, the priests and Spanish officials found it hard to impose a tax-census and control the activities of the inhabitants. Additionally, the 8,000 people who wished to go to confession and services could no longer be accommodated inside the church premises. Subsequently, division of land was needed with Tagbilaran being the first to separate from it’s mother town in 1742, followed by Balilihan (1828), Alburquerque (1868), Corella (1884) and finally Sikatuna (1917).

After a two year period of rebellion, Philippine Independence from Spanish rule was finally declared on the 12th June 1898. A month prior, American naval forces had joined the uprising and fought in a one-sided assault in what is now known as “The Battle for Manila Bay”.

Unknown to the Filipino people however, the support of the American military was not based on good-will and was in fact part of their plan to acquire a colony in Asia, with the Philippines being in an ideal strategic location. Subsequently, the Filipino’s celebrations at their establishment as a republic was short lived when in December 1898 the Philippines was officially signed over to the Americans after 333 years of Spanish rule in the Treaty of Paris for merely US$20 million.

Finally realizing the deception of the Americans, Filipinos again prepared for war. However, after a year of fighting, the provinces started falling to their invaders, and on March 17, 1900 American forces landed in Dauis and marched to Tagbilaran to claim the island.

Outwardly, the Boholanos cooperated with their new masters. In secret however, the local leadership was planning for all-out insurrection, which broke into hostilities on September 1st, 1900, when all of the leading citizens in Tagbilaran and major towns took up arms and fled to the hills to carry on the struggle. The Americans fought back ferociously, burning entire towns and torturing those suspected of having sympathies with the insurgents in the mountains.

It was this dire condition that was faced by the Municipal Mayor of Baclayon, Tan “Tiyoy” Oppus, scion of the illustrious Oppus clan of the town. The Americans were planning for his arrest due to his conspiring with the insurgents. Despite this, Tiyoy stood his ground claiming “I don’t care if they give me water cure; I just hope they would use cerveza instead”.

It was in September that a hostile troop of American soldiers entered Baclayon intent on burning the town. Aware of their impending arrival, they were met Mayor Tiyoy who had prepared a table full of food and drinks to welcome them into the town. Touched by the act of courage and tact from the Mayor, the Americans decided not to burn the town. The devout said that “it was the Patrona of Baclayon who did it”, while those with a fine sense of justice and fairness insist it was because of this unlikely hero; had he been less tactful, Baclayon’s rich heritage in its ancestral houses and delightful relics would not still be standing today.